Three African girls and women STEM initiatives have won a total of 7,000 United States Dollars from the inaugural Miss.Africa Seed Fund from the Miss. Africa Initiative, a pan-african trust program of DotConnectAfrica (DCA). 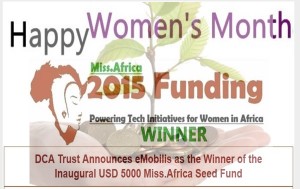 Over 90 applicants from more than 18 Countries in Africa across the African continent applied for the Fund. Among the countries, Nigeria emerged with the most number of applications at 23% followed by Kenya (20%), Uganda (15%). South Africa and Tanzania tied at 8%, Ghana (6%), Cameroon (5%) and Rwanda with 4 % of the entries.Other which fell under 1% include Algeria, Burkina Faso, Benin, Ethiopia, Madagascar, Malawi, Swaziland.

eMobilis a Kenya based Mobile Technology Institute that runs Mobigirlz was the grand prize winner of the Miss.Africa Seed Fund for an amount of USD 5,000. In addition to the Five Thousand United States Dollars (USD 5000) grand prize, a category of One Thousand United States Dollars (USD 1000) was granted as a second prize for other applicants from emerging African countries that create further socio-economic value for women by effectively leveraging tech opportunities.

A startup Madagascar based initiative Tech MDG / Pyladies Antananarivo, MDG led by Ms. Aina Anjary Fenomamy R. to encourage girls to study and build career in computer sciences or other STEM fields as well as educate Malagasy mothers concerning the use of technology, and Pycon Cameroon, led by Mr. Ngangsi Richard that teaches computer coding to girls and women.