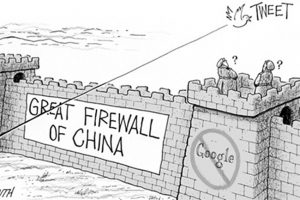 The the US government through the assistant commerce secretary Larry Strickling and state department ambassador Daniel Sepulveda have warned that Chinese government could fragment the internet if it pursues new registration rules for online addresses.

The warning is in response to a decision by the Chinese government in late March to require all domain names in China to be registered through government-licensed providers based in the country. China is known for the restrictive policies on what people can do online but the new rules, updated for the first time in over a decade, specifically note that any company providing online addresses “shall have the capability to engage in real name verification and users’ personal information protection”. In other words, every domain name owner will be known personally to the Chinese government.

Strickling and Sepulveda have argued in a letter make public through a blog post on Monday that the Chinese approach “runs contrary to China’s stated commitments toward global Internet governance processes as well as its stated goals for economic reform,”

The regulations appear to create a barrier to access and force localization of data and domestic registration of domain names.  Whether driven by a motivation to increase control over Internet content in China or a desire to increase the quantity of Chinese-registered domain names, these regulations would contravene policies that have been established already at the global level by all Internet stakeholders (including Chinese).  If put into effect, these regulations would have potentially large and negative repercussions for everyone.

The regulations have led to expressions of concern in comments formally submitted by governments, including the United States, companies, and other stakeholders around the world that support an open and interoperable Internet.

The most controversial provision of China’s draft domain name measures – article 37 – has attracted considerable international concern, as some have interpreted the article to mean that all websites with domain names registered outside China will be blocked, thereby cutting off Chinese Internet users from the global Internet.  While Chinese authorities have clarified that the intent of the article would be to prohibit access to Chinese-registered domain names that are acquired from registries/registrars that are not in compliance with Chinese regulations, concerns remain that the language in its current form is vague and open to differing interpretations.  Even if applied to Chinese-registered domain names, China’s approach to DNS management within its borders could still contravene, undermine, and conflict with current policies for managing top level domains that emerge from the Internet Corporation for Assigned Names and Numbers (ICANN), which follows a multistakeholder model in its community-based and consensus-driven policymaking approach.

Other concerns with the measures include requirements for forced data localization and real name verification for the registration of Internet addresses.  This forced localization, though not unprecedented in China, would potentially create new barriers to the free flow of information and commerce across borders and consequently infringe upon internationally recognized commitments on free expression and trade.  The regulations would also appear to formalize an explicit system of online censorship by forbidding the registration of websites containing any one of nine categories of prohibited content, broadly and vaguely defined, and creating a blacklist of “forbidden characters” in the registration of domain names, adding an extra layer of control to China’s Great Firewall.

The US says “What we do not accept is the exercise of aggressive authority over people’s use of the Internet or the ability of a government to prevent the world from reaching its people.  Sadly, this is exactly what Chinese authorities, through these recent measures, are trying to do.  Such efforts will not only create undue burdens and challenges for enterprises, both Chinese and foreign, operating in China, but they will also diminish the view of China as a constructive partner in the development of the global Internet.  Furthermore, they will hinder Chinese technology and services from achieving acceptance outside of China.