Facebook has released new AI controlled hardware at quite n odd time when its fighting privacy breach allegations. The devices Facebook claims creates a new way to videochat with your Facebook friends. It’s not an app, nor is it some awkward virtual-reality playpen. It’s a device called Portal, and it’s meant to sit in your living room and serve as a two-way conduit for conversations with faraway friends and family. It has a 12-megapixel camera on the front, and a big, bright HD screen so you can see the person on the other end of the call. 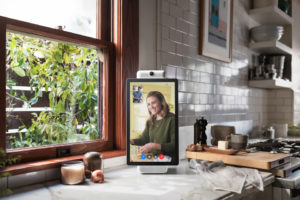 On the surface, the Portal devices work much like the Amazon Echo Show or the Google-Assistant-powered Smart Displays from companies like JBL and Lenovo. The technology might appear nifty, but not at this time when privacy is at stake, the device has a smart camera on it that scans into your home, it follows you around and ensures you stay in view while the system minimises background noise and enhances the voice of whoever is talking. “It’s like having your own cinematographer and sound crew direct your personal video calls,” Facebook says.

Facebook spokes person adds, “We know that privacy and security are important when you bring new technology into your home. That’s why we designed Portal with tools that give you control” Not sure this inspires any confidence given the many instances of breaches in a space of months at a time.