Google’s decision to withhold its Android software from Huawei is being seen as the beginning of a technology cold war that could compel African countries – in the future – to choose between US and Chinese technology, analysts have told the BBC.

Most Africans connecting to the internet today are likely to be using a Chinese smartphone, powered by a Chinese-built network, and at least half of the time, it was built by Chinese tech giant, Huawei.

“Huawei built huge swathes of Africa’s current IT infrastructure and if the US is successful in crippling the company, the aftershocks could be very painful for Africa’s burgeoning tech sector that now relies on a company in Washington’s crosshairs,” Eric Olander, from the South Africa-based China Africa project, says.

US President Donald Trump has been leading a public campaign urging American allies to cut ties with Huawei, saying the company’s technology, among other things, was a security risk because it allowed the Chinese government to spy.

The company has repeatedly denied the claims.

The US campaign could spark what Eric Schmidt, Google’s former CEO, predicted would be the inevitable bifurcation of the internet, between a “Chinese-led internet and a non-Chinese internet led by America”.

If this happens, Africa should not take sides, Harriet Kariuki, a Sino-African relations specialist, told the BBC.

“It’s not our battle, we should instead focus on what works for us,” she said.

African countries should instead come together to educate people about what is at stake, and hopefully agree on an EU-type data protection law to protect African consumers, Ms Kariuki said.

“This is probably the time Africa considers developing its own technologies relevant to its market instead of being passive consumers. I want to see African countries come together and push back against this creeping digital colonisation,” she told the BBC.

While the recent concern about Huawei has been focused on communications networks in the West, there are also allegations of a previous security breach in Africa.

Critics of Huawei operations point to a report in January 2018 in French newspaper Le Monde that found that the computer system at the African Union headquarters in Ethiopia’s capital, Addis Ababa, most of which was installed by Huawei, had allegedly been compromised.

The discovery found that for five years, between the hours of midnight and 0200, data from the AU’s servers was transferred more than 8,000km away – to servers in Shanghai.

The allegations were denied by the African Union and Chinese officials. 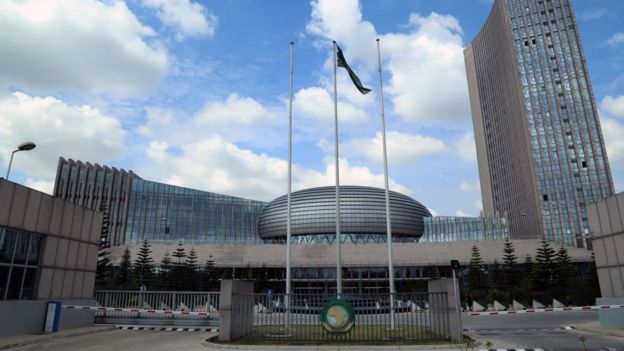 African governments, even those with close security relationships with the US, have mostly sat out of the debate about Huawei – and the reasons are obvious.

Huawei runs a vast operation in Africa including being a major seller of smartphones.

It has built most of Africa’s 4G internet network, Cobus van Staden, a Senior China-Africa researcher at the South African Institute of International Affairs, told the BBC.

The CEO of Kenya’s telecom giant Safaricom Bob Collymore said Huawei had been a “great partner for many years”.

“We would like to stick with our partners as much as we can, however there can be some practical difficulties if the embargo is on American companies working with Huawei because it is an interconnected business,” he said in a recent speech.

About Huawei in Africa:

The company, which opened its first office in Africa in 1998, is also in pole position to win contracts to roll out 5G network on the continent.

The super-fast network is touted as the internet iteration that will power “Internet of Things” technologies, smart cities, autonomous vehicles, and more.

“The scaling of Huawei’s presence on the continent has been made possible by being the first company to exploit the potential of the IT economy in Africa, and having the wherewithal to support its projects,” Mr Van Staden said.

“China’s tied-aid conditions that requires African governments to work with Chinese companies, has also helped it,” he added.