It was a rough week for arrogant and unaccountable ICANN. A U.S. District Court Judge, The Honorable R. Gary Klausner, in Los Angeles, actually held the California corporation accountable, a rare event, to which most stakeholders can attest, sweeping aside every one of the arguments interposed by Jones Day, ICANN’s lawyers, and granted a preliminary injunction “barring ICANN from delegating the rights to [new gTLD] .Africa until this case [DotConnectAfrica Trust vs ICANN and ZA Central Registry] is resolved.” You can read the Court’s full decision at Will ICANN File An Interlocutory Appeal in DCA Trust gTLD AFRICA Case? | DomainMondo.com.

If this all sounds like a confusing mix of global internet governance with California state law and jurisdiction and U.S. federal law and jurisdiction (U.S. District Court), welcome to the world of ICANN and the legal system of the United States of America, see Erie doctrine (Wikipedia).

“All contracts which have for their object, directly or indirectly, to exempt any one from responsibility for his own fraud, or willful injury to the person or property of another, or violation of law, whether willful or negligent, are against the policy of the law.”

Here’s the“Release and Covenant Not To Sue” that ICANN is relying on (yellow highlighting added): 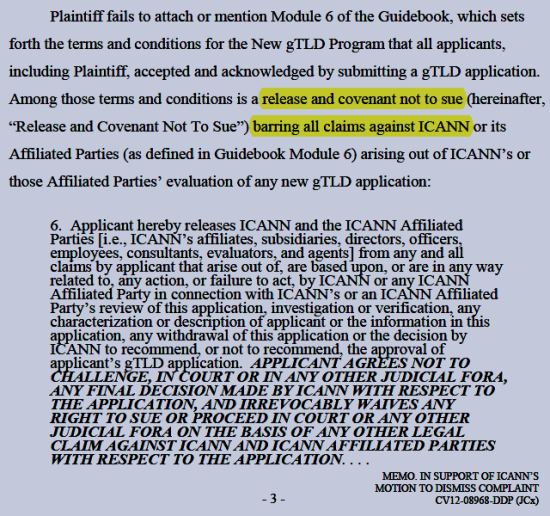 “On its face, the Release is “against the policy of the law” because it exempts ICANN from any and all claims arising out of the application process, even those arising from fraudulent or willful conduct. Cal. Civ. Code § 1668. ICANN argues that Section 1668 is limited only to agreements involving the public interest which the Guidebook is not, and cites to Tunkl v. Regents of Cal., 383 P.2d 441 (Cal. 1963) for support. However, Tunkl concerns the validity of a release from liability for negligence, not intentional acts or fraud. Here, the Release waives all liability, not just liability resulting from negligence. Thus, Tunkl is distinguishable, and the Court need not determine whether the Release is in an agreement involving the public interest … ICANN fails to recognize that the alleged conduct giving rise to this claim is intentional. Specifically, DCA alleges that ICANN intended to deny DCA’s application after the IRP proceeding under any pretext and without a legitimate reason … The evidence suggests that ICANN intended to deny DCA’s application based on pretext. Defendants have not introduced any controverting facts. As such, the Court finds serious questions regarding the enforceability of the Release due to California Civil Code § 1668 .… the public has an interest in the fair and transparent application process that grants gTLD rights. ICANN regulates the internet – a global system that dramatically impacts daily life in today’s society. The IRP Declaration recognizes that ICANN’s function is “special, unique, and publicly important” and ICANN itself “is the steward of a highly valuable and important international resources … the Court finds that both the likelihood of irreparable injury and the public interest favors the injunction …” (emphasis added).

Boiled down to its essence, ICANN’s argument seems to be:

Judge Klausner’s response, in essence, seems to be:

The fact that ICANN is arguing in a U.S. Court that there is no public interest involved in the new gTLD application process is illuminating. This may be related to what Internet Hall of Famer Dr. Paul Vixie characterized as the corruption of ICANN and its new gTLDs program. Contrast the ICANN position on its new gTLD process with that elucidated by Timothy Berners-Lee:

“When a decision is taken about a possible new top-level domain, ICANN’s job is to work out, in a transparent and accountable manner, whether it is really in the best interest of the world as a whole, not just of those launching the new domain.”

Nonetheless, ICANN is not giving up, and repeated the same arguments in a filing two days after the injunction was granted:


“Plaintiff [DotConnectAfrica Trust] asserts “[i]t [the Release or Covenant Not To Sue] cannot mean that ICANN can decide to reject a qualified applicant for any reason whatsoever.” (Opp’n at 16: 24- 26.) However, that is exactly what the contract term means. Thor Seafood Corp. v. Supply Management Services, 352 F.Supp.2d 1128, 1131 (2005) ….”–ICANN’s Amended Reply Memorandum (pdf) filed April 14, 2016, in support of ICANN’s Motion to Dismiss DCA Trust’s First Amended Complaint in its entirety, with prejudice, set for hearing on April 25 (emphasis added).


Of course, all of this bears on the touchy subject of ICANN’s future jurisdiction, which was deferred to Work Stream 2 (WS2) of the CCWG-Accountability process, for political reasons–foreign and domestic–Congress would not otherwise approve an IANA transition that changed ICANN’s jurisdiction, and others outside the U.S. are adamant that ICANN should be located in a neutral jurisdiction such as Switzerland. Jurisdiction is not a fundamental bylaw under the proposed new bylaws, and theoretically ICANN could change its jurisdiction at any time in the future after the transition is complete and the Affirmation of Committments (see paragraph 8), is no longer in effect. However, this decision to defer the threshhold issue of jurisdiction has only contributed to the dysfunction of the overall CCWG-Accountability WS1 process–all of the new proposed bylaws are drafted in accordance with, and dependent upon, ICANN’s jurisdiction remaining in California.

ICANN has tried to “play both sides of the fence” on the jurisdiction issue–telling Congress (under oath), ICANN will stay in the U.S., and telling, e.g., the French Senate, that ICANN is moving forward with plans to create a “parallel, legal, international structure, maybe in Switzerland, for ICANN,”—see Fadi Chehadé, Will ICANN Move to Switzerland? | DomainMondo.com and Will ICANN Board Disclose New Swiss Legal Structure at ICANN 50 London? | DomainMondo.com.


Wonder why people don’t trust ICANN?
• In the IANA Transition process, this Wednesday, April 20, is the scheduled posting date for public comment on ICANN’s new proposed bylaws in connection with the IANA transition and ICANN accountability proposal. Public comment period is scheduled for the period April 20 through May 20, 2016:

Calls with Community on Public Comments Submitted on ICANN’s Draft FY17 Operating Plan and Budget – Finance Community Wiki: ICANN will be holding community calls during which the comments submitted on the Draft FY17 Operating Plan and Budget will be presented by the submitters to ICANN staff. According to ICANN, this is intended to enhance the understanding of the comments and so improve the quality of the response. The schedule for these calls will be published as dates and times are agreed with each constituency group, more info here.