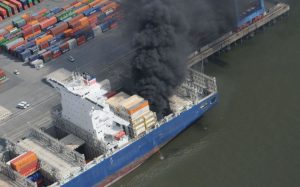 On 1 September 2016, an explosion caused a fire on a cargo ship docked in Hamburg, Germany. ICANN’s Public Meeting technical equipment was on board. The ship had departed Helsinki, Finland after ICANN56, and the equipment was bound for Hyderabad, India via Mumbai. ICANN had two containers – a 40-foot and a 20-foot container.

We immediately made back up arrangements. Having catalogued exactly what was in each crate, we enacted two plans: a) a short-term plan to purchase replacement equipment so ICANN57 experiences no disruption; and b) a longer-term plan to work with insurance brokers (under maritime law) to recover the ‘stuck’ 20-foot container. This took a lot of work in a short amount of time, given the sophistication of our gear, which in total cost ICANN about $700,000 USD of unplanned expenses (the equipment itself plus shipping and other costs).